Join A Squad To Get More Rewards! 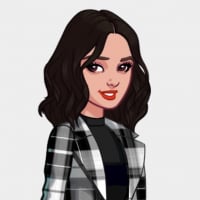 Based on your requests, there will be a major new social feature in the next update. It’s called Squads. You can create a squad with your friends to earn more rewards and shop your friends’ lookbooks. A squad can have up to 15 people. iOS and Android players can be in the same squad.

Now you can find your favorite items. If you’re connected to your squad outside the game, you can ask a squad member to put something in their lookbook, so you can buy it. The selection of items you can buy with diamonds will be the same as Get This Look in Show Your Style.

It will be easier to understand how a squad works when the update goes live. Keep in mind that this is a new feature and we plan to improve it over time. Can’t wait to hear what you think, especially once it’s available in the game.

Please feel free to use the forum to build a squad! This thread will be dedicated to feedback and you can use the Squads category to find a Squad or chat with your Squad.

#VIPKalinda
http://smarturl.it/PlayKKH
Add your platform (ex. iOS/Android) to your forum signature & save your IDs so we can help
My posts offer a sneak peek at upcoming features and prizes. Details are subject to change in the game.
59
Prev123456789Next