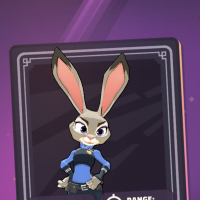 Adjusted base stats to be more in-line with other front line Offense Characters.

Another hero that was hit too hard with the nerf stick. Her kit was designed to give her some control while she’s taking big hits in the front row yet her stats were set up to make her a bit of a glass cannon. But that was ok, this is hopps, quick as a bunny with speed so fast she could shield herself from taking too much damage. But not now. Now she is slow. So slow that her shield is gone before her next attack so she loses the bonus damage from her having a shield. Her donut toss has always been more of a novelty than a real source of damage as it took so long for her to get it above her head to toss it. Her multi hop at level 4 was also a waste with almost no battles having 3 characters in a row that could be stunned. I suggest maybe making the 1sec stun increased to 2 sec stun but even now with her slow attack speed the enemy would be free of stun before next hit. Please look into giving poor Hopps her speed back. Thanks.
1