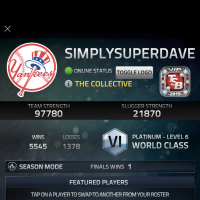 simplysuperdave Registered Users, Member 22 Posts
April 2019 in Suggestions and Feedback
I know the idea of trading players among teams has been an idea that’s been thrown around but kind a hard to do. I think that trading players should be a club option. Once you’re in the club and have been established,  Lets say for at least a week to prevent people from jumping club the club just to trade players. Once you’re in the club for a week your granted trading status. You can earn trading papers much like you are an Evo ice packs or bonus games. When you get trading papers you can put your trading papers on a player you want to put on the block. On the block would be a subcategory in the club menu. A team can place a player on the block. Then other teams in the club can then offer a player to trade for them. So every day you can go check the block and see what players are available from other teams in your own club. I think this is a really good idea and something that can be maintained. Like I said it should be a club option and mandatory time of being in the club to be granted those privileges.
I think it is something to look into and develop for next year for sure.
Sincerly
SimplySuperDave
4