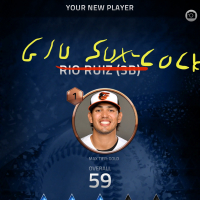 Cooz19 Experienced MemberRegistered Users 1,067 Posts
June 2019 edited June 2019 in General TSB Discussion
Full disclosure: I'm not very good at this game. I enjoy the process of building a team more than playing it, so I tend to not play as much as I probably need to in order to improve. That, and I just kind of suck at video games. I still sleep well at night. I also have no clue if I just wrote this out and it's a common practice already.

I played baseball growing up and for a bit in college. A coach I had taught the concept of "backside hitting." The basic idea is, as a hitter, to focus on the back side of the ball as it's moving toward the plate, not the front, and swing like you're trying to hit the other side of it. It's an odd concept, but what it does is get you to wait an extra nanosecond or two, and naturally drive the ball the other way.

In this game, I don't bother swinging at breaking pitches because pitchers are somehow able to get sliders that break five feet inside to out, and graze the black. Backside hitting works particularly well on breaking pitches because 1. You wait longer, thus avoiding hitting it off the end of the bat, 2. you're swinging in time with the break of the pitch, taking it where it's already moving.

To simulate that, I tried tilting my phone's screen to the opposite field of the hitter (for righties, I tilt the top right corner of my phone up to the left, so my vantage point is aimed at right field). I had something like 22 consecutive hits in the latest CvC, almost all of them to the opposite field. Tried it in a bonus game against a bit better pitcher, and I put up 13 runs, 11 of which came on five home runs.

Again, I'm really not good at this game. I couldn't get past like 2.10 on WOH on my own. I'm crushing the ball the other way now. While I agree with the lesson taught by more seasoned players in this forum that there really aren't tips to give; you just have to play the game, maybe this is a trick that helps someone who's usually way ahead of the pitch slow down a little bit.
"Will you wear a MAGA hat while you suffocate on my pork sword?" - @retirepujols
3