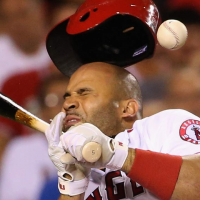 retirepujols 2,889 PostsRegistered Users, Member
October 2019 in Suggestions and Feedback
I think it would be pretty cool to have the option to cycle for previous WOH rewards. For example, before starting 1.1 I could choose the current reward (Belle), or previous rewards (let's say Ozzie Smith from 2 weeks ago or Scioscia from forever ago). Belle would be the only reward to earn bonus points, and previous rewards that are already capped on my team would be unavailable.

I think this would be a lovely feature that the players would enjoy, as it would help those of us that can't dedicate the time necessary in one Monday to cycle cap a player; it would allow players that didn't have the resources needed for player x 2 weeks ago to go back and grab him; and it would allow players that don't need the current reward another option to keep them playing on a day they may otherwise ignore.

Obviously, I would like to see EVERY previous reward available- but that would probably be asking for too much. Perhaps the past 3-5 rewards, or even past rewards brought back at random.


Just me in my world of enemies.
7