From The Devs:
We made some modifications to the overall economy to address some issues we encountered while analyzing our data. With these changes, we look forward to seeing how the community interacts with the new economy. In addition, we will also continue to monitor and adjust the economy as necessary.

With regards to the Character enhancing experience, we were unhappy with the overall time it took to get the materials as well as the lack of clear focus on which materials you need and what they do. To address this, some of these materials have been removed from the campaign maps and put into the Exchange (More details listed below). We hope this helps you understand the materials purpose and the attributes they enhance on your Character.

Because we're removing some rewards from the Adventure maps, we've gone through and increased the payouts on Coins and Level Upgrade Potions across all stages to better reward progression through the game. In the case of Level Upgrade Potions, we have adjusted the sourced amount and brought it more in line with the requirement numbers to level up Characters. Additionally, the payout ratio for Token Mode has been increased to provide a slightly higher payout than the stage's Normal Mode counterpart.

The various Exchanges have also had their contents reworked. As you progress through the game, you will notice new items showing up from higher enchantment tiers. We've also added a Premium Exchange which will be the only one which has items available for Gems. Example: when looking through the Grand Adventure Exchange, the Characters and Spells which appear there will always cost Grand Adventure currency, as compared to before where they had a chance to show up for Gems. There is, at the moment, nothing exclusive in the Premium Exchange, though we may add exclusive items to it in the future.

Crafting recipes have also been adjusted. Due to many materials being moved into the Exchanges, crafting recipes had their requirements decreased to reduce the amount of time it takes to assemble a full set of Enchantments.
Most items have been repriced in all currencies to bring them in line with new currency acquisition rates.
Ability Rune drop rates, drop quantities, and upgrade requirement quantities have also been greatly adjusted. In doing so, we have made it so you are rewarded more runes as you progress through the Grand Adventure.

Summoner Challenges have all been adjusted because of all the above:
- "Earn Level Upgrade Materials" and "Earn Gold Coins" challenges will have their rewards modified to account for the changes made to payouts in the Adventure Battles rewards.
- "Earn Ability Upgrade Materials" will go from dropping only 1 ability rune to you potentially getting all 3 ability runes in a single attempt, so long as you have reached a tier that has all 3 ability runes available.
- For the three Enchantment related challenges, they no longer reward full tier pieces and instead reward crafting materials from that tier.

Additionally, when multiple tiers are available as possible rewards for a challenge, a payout from each tier will occur. This unfortunately had to change due to the speed at which players were acquiring high level enchantment pieces, which was unintended.

Due to the large number of changes, we made the decision to not adjust your current inventory levels. There is going to be an adjustment period and some initial confusion, but as always, constructive feedback from the community is greatly appreciated as we continue to try and build a fun and enjoyable game for everyone as we move toward World Wide Launch.

Thank you everyone for your passion and continuous feedback!

TL;DR – This economic revision reduces the amount of time required to upgrade a character

1. Remove binders from campaign mode and put them into the Exchange

There are 7 Primary enchantment types:

There are 5 binder types, that each correspond to 1 or 2 enchantment types. 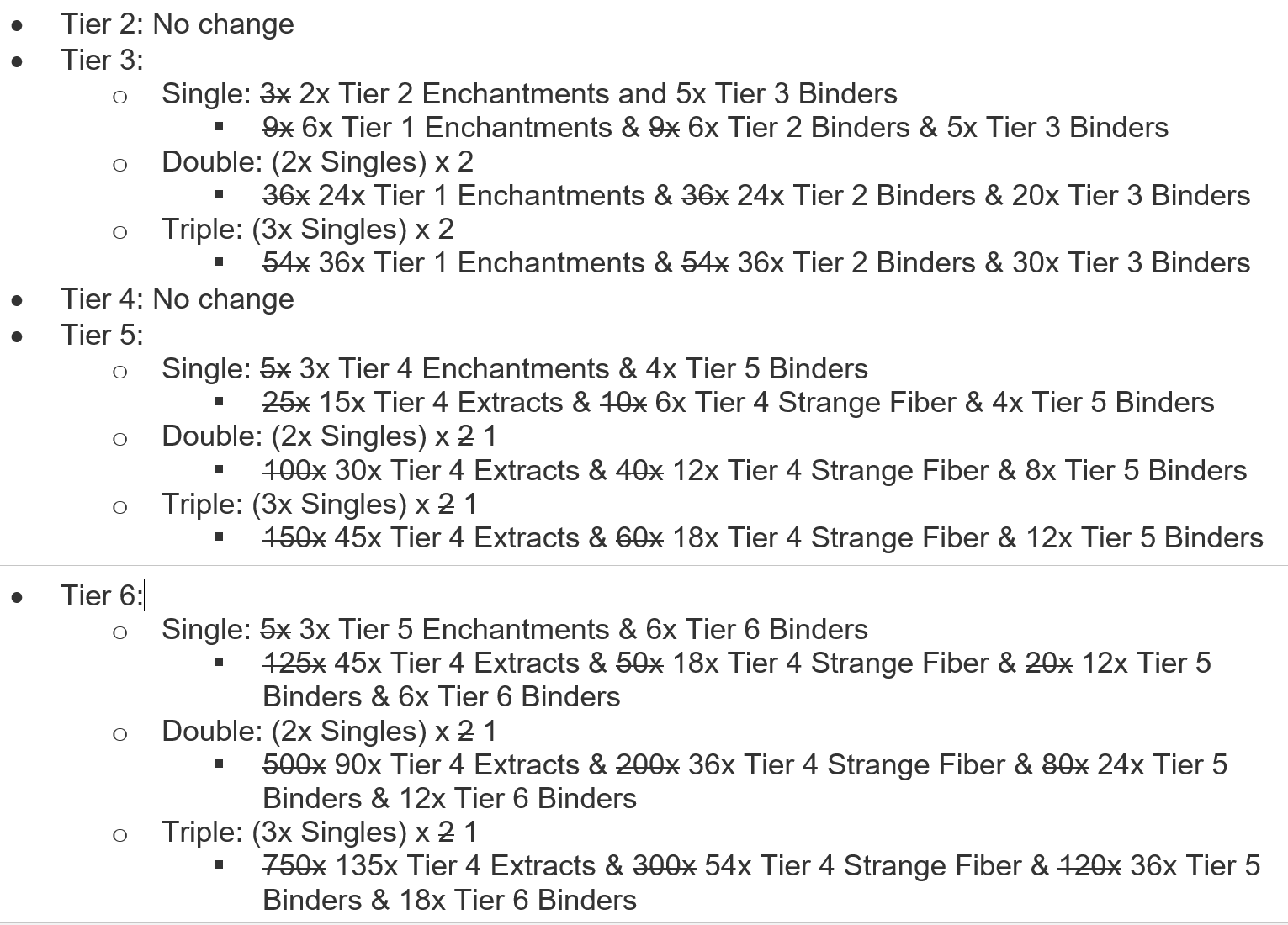 3.  Removed Gem purchasable items from current Exchange stores and put them into a Gems only Exchange section

a.       Coins – Reduce payout to coincide Coin earning in campaign

i.  At the appropriate tiers, you can potentially earn all 3 ability mat types in a single attempt

We hope you enjoy it! Please be sure to leave us all your constructive feedback in the thread below. Thank you!